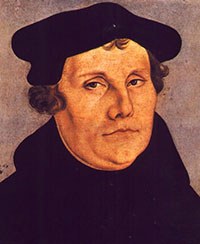 Martin Luther was eight years old when Christopher Columbus set sail from Europe and landed in the Western Hemisphere. Luther was a young monk and priest when Michelangelo was painting the Sistine Chapel in Rome. A few years later, he was a junior faculty member at a new university in small-town Germany, intently studying the Scriptures, “captivated with an extraordinary ardor for understanding Paul in the Epistle to the Romans.”

In these days Luther was tormented by the demand for righteousness before God. “I did not love, yes, I hated the righteous God who punishes sinners, and secretly, if not blasphemously, certainly murmuring greatly, I was angry with God.” Then, in the midst of that struggle with God, the message of the Scriptures became clear, like a long-shut door opening wide. When he realized that a “merciful God justifies us by faith … I felt that I was altogether born again and had entered paradise itself through open gates.”

What Luther discovered is the freedom of Christians trusting God’s mercy in Christ. As he later wrote, “Faith is God’s work in us. It changes us and makes us to be born anew of God. This faith is a living, busy, active, mighty thing. It is impossible for it not to be doing good works incessantly. Faith is a living, daring confidence in God’s grace, so sure and certain that believers would stake their lives on it a thousand times.”

This discovery set Luther’s life on a new course —both his own life and his public service as a preacher and teacher. When a church-endorsed sales team came to the Wittenberg area in October, 1517, Luther was concerned that the promotion and sale of indulgences undermined the promise of God’s unreserved mercy in Jesus and the faith that trusts that promise.

His 95 Theses or Disputation on the Power and Efficacy of Indulgences became the first of a life-long stream of books, sermons, letters, essays, even hymns in which he expressed his confidence in this life-giving promise from God, the Gospel, and its liberating implications for all of life in church and society.

Learn more about who we are as Lutherans world-wide.

*All baptized Christians, who believe in the Real presence of Christ in the bread and wine of Communion are welcome to receive at JELC.